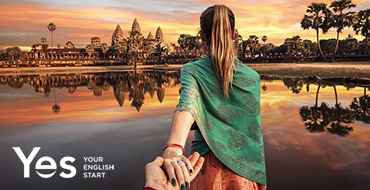 A young and creative photographer from Dagestan Murad Osmann became famous for his photo project called “Follow me”. Together with his girlfriend Natalia they travel around the world and picture their adventures in an unusual way. In each photo Natalia is holding Murad’s hand and leading him all over the most picturesque spots of our planet. Behind her back we can see fascinating landscapes of the world’s places of interest in different countries.

The first shot was taken in Barcelona in autumn in 2011. Accidentally, as Murad said. During one of the excursions he was filming the surrounding landscapes. Natalia, who accompanied him on the trip, got bored of waiting for the ever-busy young man and pulled his hand. However, even then Murad didn’t give up and continued to photograph. So, the first masterpiece from his series appeared.

Looking through the pictures, Murad and Natalia hit upon the idea of creating an interesting photo project. Since they both love travelling, their collection of pictures has grown to almost the size of a photo exhibition. The young couple has already visited and captured places such as Venice, Tokyo, Paris, Bali, London, Singapore and many others. All the places are easily recognizable.

Step by step, Murad Osmann started uploading photos to the Internet. In 2013 his Instagram account gathered tens of thousands subscribers and Murad’s name became world-famous. Today, Osmann has more than 250000 followers and fans around the world. Each new shot posted is instantly spread in social networks and gets thousands of enthusiastic comments and high rates. Moreover, Murad has a lot of people who try to follow his way of taking photos. So, the photo project that wasn’t even planned became the world mainstream.