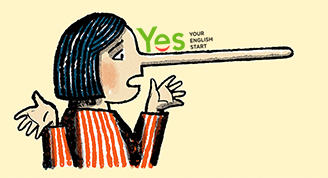 Hello, friends! My name’s Diana and I am a liar. How about you? It may seem a paradox but if your answer is “No, I am not” than – congratulations! – you are! 
Let’s sort the things out now.
I am sure that every person has ever been in a situation when somebody tells you one thing but acts absolutely another way. Why does it happen? What makes people lie?
You start lying since your childhood. You don’t want your parents to get angry with you and that’s why you say that it was your younger brother who had broken the vase. Almost the same happens when you become older and get a job. You don’t want your boss to be mad with you and that’s why you say that it’s the broken bus that is to blame for your being late.
Let’s just imagine. If someone says that he wants a million dollars – is he telling the truth or lies? Of course he is lying! He is obviously keeping something back. Do you know why? He does want a million dollars, but he doesn’t want to work hard for getting it. Isn’t this argument more plausible?
Ok, here comes another situation. You finally reached your warm bed after a long and exhausting day and feel that you haven’t got any powers even for watching TV. Suddenly a friend of yours phones you and asks you to go for a walk with him. Most of us would lie and say “Sorry, I can’t go out with you because I can’t leave my little sister at home alone” or “Sorry, I have to prepare for a very important exam” or “I can’t, I’ve got a bad cold”. Do you recognize yourselves? In my opinion, people lie in such cases only because they don’t want to hurt somebody they care for. And they just have to find a serious reason for refusing.
But isn’t it easier to tell the truth? Don’t you think that people who really love you would understand? Can we control ourselves? Isn’t it better to think twice before telling lies? Sometimes I think that the truth could help us get closer to each other. But I also realize that it’s impossible to always be honest in our life. Think over and it’s up to you to decide how much lies you can tell a day.

P.S. If you got interested in this topic I suggest you doing this interesting test below. It’ll take you only 5 seconds to find out if you are a good liar or not. Go ahead and then test your friends!