The advantage of reading text in original | Yes

The advantage of reading text in original 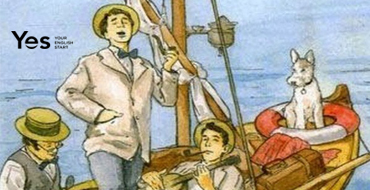 Learning English and immersing yourself in the culture of the country, you begin to get acquainted with foreign literature. The most difficult thing is to take a book in the genre of comedy, because English humor is not easy to understand with “bad English”. And to read it in Russian is not the way out because it is the very genre that you just have to read in origin. But if you are rather good at it and you have at least intermediate level, here is a book I strongly recommend you — «Three men in a boat( to say nothing of the Dog)». This book is for real connoisseurs of English humor, which is in abundance here. The ease of narration, understandable situations, English stiffness and comicness — you can meet it all here.
The book quickly earned the readers’ love, which was incredibly surprising to the author, who believed that he «happened to write funnier stories». Whatever it was, the «Three men in a boat» is almost the most hilarious book in the world, well, at least one of the them.

Now as for the humor, why is it so necessary to read it in origin?
Countries and nations on Earth differ in their customs, traditions, culture and standards of conduct. All these aspects of people’s lives are inherent in every nation, as well as humor. But humor also differs among all the people of our planet, especially its perception in certain situations. British humor differs from Russian a lot. It is not a property of an individual or a group of people. It is typical for all residents of Britain without exception. It can be called its national feature. According to a quote from their book: «To England with Love»: «The English are laughing at everything that can cause a smile, at the mastery of this world, the government and even members of the royal family. They do not take offense at a joke, and the ability to laugh at oneself is considered a virtue. »

English humor is also quite often contained not so much in the text itself as in the subtext, but it can also demand the ability to have a certain skill in understanding humor. If, however, you don’t possess such ability, it will be difficult for you to distinguish English humor from a serious statement.

Those who read “Three men in a boat” can say that the humor of the English means both irony, and fantasy, and absurdity. The simple and comedic language of this work brought the various proverbs and idioms to English, for instance:

The English are proud of their humor. They also consider their sense of humor a national dignity and wealth. Nothing is impossible to infringe on their national self-esteem in the same way as saying that their humor is not funny or completely absent in their culture and nationality.