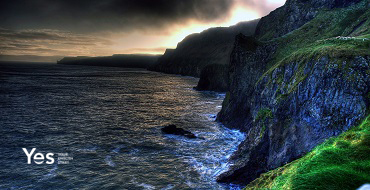 What comes to mind at the mention of this faraway Northern country? Green clover and harp … Leprechauns and Druids…Rugby and dance… Here August is the autumn month, and the word “bad” is synonymous with “cat”. The form “amn’t” exists here, but there are no words “yes” and “no”.

And what fairy-tale characters live in Ireland?

Here are some characters from ancient Irish legends. 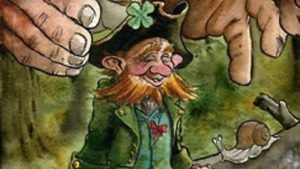 Perhaps the most famous is the leprechaun.

Leprechauns are naughty little men in emerald green clothes. According to the legend, they like to collect gold, which they keep in a pot and hide at the end of the rainbow. If you catch a leprechaun, he must fulfill three wishes.

Leprechauns first appeared on screen in 1947 in a cartoon “The Wee Men”, and then they would return in “The Emerald Isle” and “Leprechauns’ Gold” in 1949. Also there is a film The Luck of the Irish (1948).

But there is a creature, in comparison with which the leprechaun is a harmless little thing. This is a cruel dwarf, abhartach, 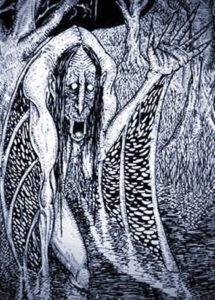 whose magical powers allow him to rise from the grave and wreak havoc as an undead being. The only way to destroy it is to kill him, then bury him upside down! Also, this creature drinks the blood of his victims. Some specialists believe that this monster inspired Bram Stoker’s Dracula, which in turn has influenced the modern-day concept of vampires. There are lots of films about this terrible tyrant such as “Dracula” (1992) or “Dark Prince: The True Story of Dracula” (2000). 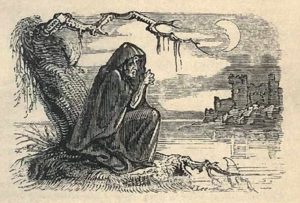 Banshee is another scary creature, but in a body of a female. This ancestral spirit warns five major Irish families about death. She can appear in different forms of a woman or as a crow, weasel or stoat. There is evidence that King James I of Scotland was approached by a banshee shortly before his death.

The most feared type of Irish fairy is pooka. This is a violent shapeshifter who emerges at night taking the form of a black 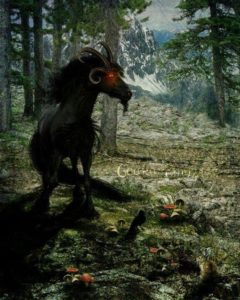 horse or a goblin. Many believe that Puck, from Shakespeare’s A Midsummer Night’s Dream, was based on a Pooka. The similarities in the name and Puck’s spiteful behavior certainly approve this idea. 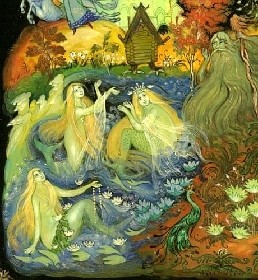 The word “merrow” or “moruadh” comes from the Irish “muir” (sea) and “oigh” (maid). Mermen, or merrow males are described as exceptionally ugly and scaled, with pig-like features and long sharpened teeth. Merrows are very beautiful and are promiscuous in their relations with people. They are not to be confused with mermaids as they have human-like legs instead of a tail. Their feet are flat, their hands have a thin webbing between the fingers. Don’t think that merrows are kind to people. In some parts of Ireland, they are regarded as messengers of doom and death. But still, marriages between merrows and mortal men happen. The Irish poet W B Yeats reported such case in his Irish Fairy and Folk Tales: “Near Bantry in the last century, there is said to have been a woman, covered in scales like a fish, who was descended from such a marriage”.

Kelpies are evil water spirits who often appear as a foal or horse. Their beauty attracts people. Once the poor rider is on the 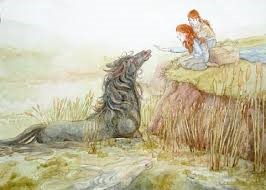 back, the kelpie’s skin becomes adhesive and traps its victim. The kelpie then rides into the water drowning its victim. They eat the victim leaving only the heart and liver. There are many, and Irish parents tell their children stories of women marrying kelpies in human form to so to keep them away from the water.

Another Irish death omen is the dullahan,  a headless man riding a black horse wearing a black cape. In his left hand he holds a human spine for a whip and in the right he holds his grinning head. 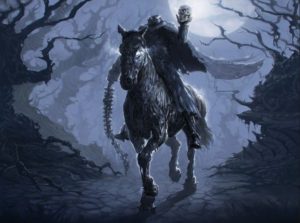 If you see a still dullahan, someone will die imminently. There have been countless reports of dullahan sightings right before a death locally.

The description of the headless horseman in the novel of the same name by the Irish writer Mein Reed, bears a clear resemblance to dallahan.

«The Legend of Sleepy Hollow» is a horror story by American author Washington Irving written in 1820, also inspired by the headless harbinger of death. 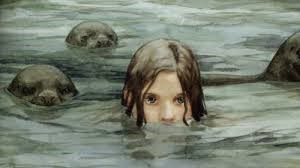 Seal people, or selkies, are cursed with an eternal desire for what they do not have: when they are swimming in the water as seals, they long to be on land, and when they walk on two legs as a human, they yearn to be in the sea. They can transform from one creature to another by shedding their sealskin, and putting it on again.

I learned about these poor mythical creatures from the heartbreaking in my opinion cartoon named “Song of the Sea”. A hand-drawn cartoon by Tomm Moore, is a story of a 10-year-old Irish boy named Ben who discovers that his mute little sister Saoirse, is a selkie, who has to save faerie creatures from the Celtic goddess Marcha.  It was nominated for the Academy Award for Best Animated Feature at the 87th Academy Awards in 2015, so, it is certainly worth seeing. 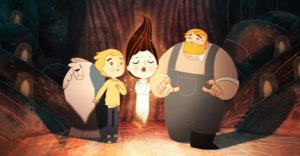 An interesting fact — in a certain collection of lore in County Kerry, there is an onomastic tale in Tralee which claimed the Lee family was descended from a man who took a murdúch (mermaid) for a wife; she later escaped and joined her seal-husband, suggesting she was of the seal-folk kind.