Break on through | Yes

Yes > Teacher's Blog > Break on through 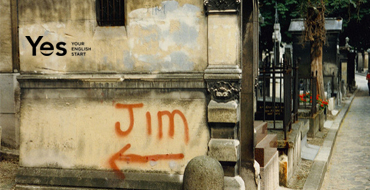 The reason of this versions range was in his closed coffin that had brought millions of his fans to a mystic suspicions.

He’ve found his last resort at the Pere Lachaise cemetery in Paris. The neighborhood is magnificent indeed: such brilliant 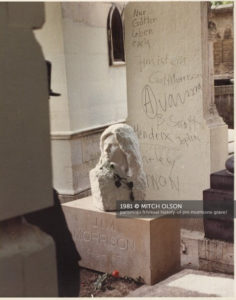 Morrison’s grave’s been living its own autonomous bright life, though it may sound weird. His silent neighboring with a stunning dead writers, musicians, artists and politicians wasn’t always peaceful. There were days when it was too vital and noisy. Fan tributes marked Jim’s grave for the first couple years until a concrete grave curb was installed. Suffice it to say that a proper headstone (that was benevolently crafted and installed by a Croatian artist Mladen Mikulin) was fated to stay at its place for only eight years, for the bust was stolen by his fans in March 1988.

In 1990 the new grave curb and headstone were installed and the previous headstone was completely destroyed. 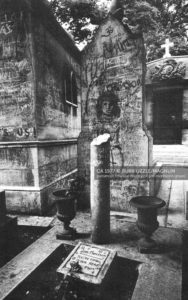 In 1991, the 20th anniversary turned unruly and prompted police to disperse fans with tear gas. Five years ago, police closed the cemetdisappointment of hundreds of attendees.

Over time Jim’s grave and neighboring graves were seriously defaced, the attached pictures are proving it. The graffities on his and a number of facing graves and mausoleums were removed several times. By 2004 cemetery officials had found the solution by putting up a metal barricades around the site. That drastically changed the vibe at his grave.

We took our chance to embrace the vibes of this special place. On the 40-th anniversary of his death we travelled to Paris to join hundreds of other fans at Pere Lachaise cemetery. People of all ages, nationalities and generations would read his poems and sing his songs for hours in the face of cemetery security officers who’ve been literally loosing their hope to be heard and had nothing left to do but surrender and dance with the elated crowd.

What I’m totally sure about is that when you happen to find yourself at the city of wine and baguettes make sure that tour to Pere Lachaise is in your must-see list.